Growth In Palm Beach Gardens Is Centered Around Public Transportation

This rendering shows how the area around a new Tri-Rail station along the FEC tracks at PGA Boulevard and Alternate A1A could be developed. Rendering from Treasure Coast Regional Planning Council

City officials should capitalize on a future Tri-Rail station by targeting development of office space, hotels and new housing for millennials around it, a planning expert says.

RELATED: Tri-Rail Station likely coming to Gardens, but where will it go?

The Tri-Rail station will sit near the Florida East Coast tracks at PGA Boulevard and Alternate A1A. The commuter train service stretches from Miami and stops at 45th Street in Mangonia Park, but plans have been in the works to extend the service to Jupiter.

RELATED: PGA Boulevard train station will be at center of Gardens redevelopment

“It is the most important station in the extension by virtue of ridership and the destination quality that you have,” Kim DeLaney, director of strategic development and policy for the Treasure Coast Regional Planning Council, told the Palm Beach Gardens City Council.

DeLaney presented an update on development and redevelopment opportunities around the station to the council June 7. The regional planning council will transmit a final report in the next two months and give a council workshop if requested.

PGA Boulevard has long been designated as a train station along the FEC corridor, and the city received a $120,000 Federal Transit Administration grant last summer to plan for it.

Tri-Rail plans to capitalize on track improvements Brightline is making to eventually expand its high-speed passenger train service to Orlando. Brightline’s double-tracking from 15th street in West Palm Beach to State Road 528 in Cocoa will create extra capacity for other users, DeLaney said.

With the advancement of Brightline, Tri-Rail could be extended north within the next five to six years, Palm Beach Gardens Director of Planning & Zoning Natalie Crowley said.

The retail, office space and other workplaces are currently separated from the residential development in that area, DeLaney said.

On the whole, the city is a major employer for both the county and the region, with 40,000 jobs and 3,000 registered businesses.

The city has 15,000 people coming in to work every day and only about 2,300 going out, she said. And that’s not helping the city’s traffic concerns. As cities grow, they need to figure out how to move people other than in their cars by themselves, she said.

Most of the city’s 2 million square feet of future office space is out west in Avenir, so city officials may need to come up with some strategies to encourage development around the station, DeLaney said.

One exception is BBX Capital Real Estate’s development of PGA Station, almost 200,000 square feet of new office space, a parking garage and a hotel next to the future train station. The station is also near where Florida Power & Light plans a future campus that could host 4,000 employees on 80 acres.

There are 1,600 hotel rooms in the city with 75 percent occupancy, indicating the ability to finance more, DeLaney said. The former Loehmann’s Plaza is a key site, with visibility from Interstate 95 and proximity to the train station, she said.

It “creates a really ripe opportunity to position that site for a hotel going forward,” DeLaney said.

A transit-oriented development program could allow the city to introduce 1,900 to 2,400 new housing units over 30 years, DeLaney said.

That may require strategies to speed up financing in the core area, she said.

“That data corresponds to why the population is tending to remain older and the city is losing its ability to attract younger employees,” DeLaney said. “There aren’t many options for those employees to live in the city, so if they have to drive to get here, they’re choosing to work in other locations.”

The Loehmann’s Plaza site could lend itself to residential development around a 200- to 400-room hotel with ancillary meeting space and restaurants, DeLaney said.

The Gardens Mall has about 7,000 parking spaces, with spaces available even on Black Friday and Christmas Eve, she said. Kyoto Gardens Drive could be extended to the mall and new residential units and sidewalks could frame the street. That would also make it more pedestrian-friendly so that people don’t have to cut through hedges if they’re walking to the mall for coffee or lunch, as they’re doing now.

PGA Commons developer Joel Channing said he agrees with the concept of transit-oriented development because it’s economical and helps certain problems, such as a shortage of housing for the city’s work force.

“What really needs to be added is moderate cost rental housing. That will help bring more employees as the town grows,” Channing said. 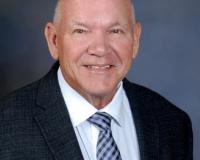